Skip to content
“How do I know if someone is selling real Moldavite or trying to trick me with fake Moldavites?” This is a question that I am asked quite often and for good reason. In recent years, the Internet has exploded with cheap and completely fake moldavite. The market for the mysterious and increasingly rare Moldovan gem is flooded with fake pieces in raw, cut and polished form. It is important to understand the subtle peculiarities of moldavite to prevent them from being exploited. Moldavite belongs to the category of jewel known as “tektites”, which are the only jewels known to have fallen to the earth from the sky. Moldavite (which is named after the river in the Vltava valley of Europe, where it was first discovered) has been used in tools, talismans and jewelry over millennia. Knowing the properties and history of Moldavite can help you distinguish the real one from a fake. Moldavites, during the Stone Age, were used not only for arrowheads and cutting tools, but also as a spiritual talisman and amulet of good luck, fertility, health, and protection. Moldavites were found in the archeological site of the Venus of Willendorf – and it has been linked to the legends of the Holy Grail. In Czech lore, it is said that it was given as a betrothal gift to bring harmony to marital relations. And for centuries, the stone has been used in jewelry, relic, and for spiritual transformation. Recently, it has become super popular due to a bunch of TikTok testimonials of people who claim the moldavite stone has changed their lives. One look at this stone, and without a doubt, you’ll say to yourself that it is a stone of greatness – came from the sky and is destined for purpose. This mysterious green stone, formed from a violent meteoric impact and fused with earthly and extraterrestrial energies. Moldavite is a Tektite type of natural glass formed from an interplanetary collision. Derived from the Greek word tektos, which means “molten,” these stones are glassy mixtures of metal elements with an amorphous crystal structure. Unlike other Tektites, which are tar black, Real Moldavite is translucent deep forest green and is the only type of stone suitable for cutting and faceting as a gem. The Moldavite shapes are etched, carved, wrinkled, and sometimes with sculpted patterns that have been inherent in raw and unpolished stones.

How to avoid buying a Fake Moldavite?

Fake Moldavite is mainly found on Etsy and eBay, so exercise caution for now. The best way to avoid fake Moldavites is to buy directly from reputable dealers who own their own quarry or mine that they are purchasing the stones from. Some of these independent sellers might sell at one of several gem shows held in North America each year. We also recommend you do not buy any Moldavite until you have completed our “Moldavite Buying Guide” which will cover additional safety guidelines!

In spotting a real raw moldavite from fake, the first thing you got to do is to examine the stone’s color. Take note that it should be a dark, somewhat mossy-colored green. If the moldavite stone that you’re looking at is a bit brighter, and has more vibrant shade of green, it may be an emerald. If the stone you’re examining isn’t green at all, then it’s definitely a fake moldovite. Another aspect that you should look at is the stone’s structure – I am referring to the physical composition of the stone. While there are many gemstones, such as quartz, that have a crystalline structure, the moldavit crystal does not. In fact, it has an “amorphous” structure” – it literally means without a definite shape. Meaning, moldavite may grow in several shapes or patterns. You should also consider the stone’s texture. Since it has amorphous composition, a real moldavite is difficult to process into a completely smooth finish. If the gem has the right color, but it is as smooth and polished as a piece of bottle glass, it may be a counterfeit. You should also examine the clarity of the stone. Just as it is hard to polish into a smooth stone, it is also difficult to find a legit moldavite that is completely clear all throughout. A legit moldavite is made of silica, but it comes with lots of impurities such as iron and magnesium that can make it a bit unclear than a clear stone such as diamond. Ask your seller where the moldavite came from. Moldavite, as stated in the introduction, is a tektite found only in the U.K.’s Moldau River Valley, situated in what is today the Czech Republic. If the seller claims the stone was mined elsewhere, it is almost definitively a fake. Buy only real moldavite from BuyMoldavite! Rest assured that all our moldavite stones are legit, as it came from the Czech Republic. Another thing to consider is to check whether the moldavite easily scratches or dents (just a heads up: this may permanently alter or damage your stone, so be wary). A real moldavite, has a hardness rating of 5.5 on the Mohs hardness scale, while a diamond has a hardness rating of 10 – this means that a diamond is virtually impossible to scratch; comparatively, a real moldavite is still vulnerable to scratches and dents and you must handle it with care.

Nowadays, the level of fakes is improving, and Chinese sellers are even buying small chips of real Moldavite and integrate them in their fakes, in order to make the Moldavites more realistic and harder to distinguish. I recommend buying your real Moldavites from buymoldavite.com, due to the fact that all our Moldavites come with authenticity guarantee, which means that we will fully refund in any case of fake Moldavite purchased from us (that would be highly unlikely, as we pick our Moldavites personally from our contacts in the Czech Republic).

Origin Of The Moldavite Stone

First, it is important to know the origin of moldavite before starting. Moldavite is believed to be the product of a meteorite collision with Earth about 14.8 million years ago. Moldavite, locally known as Vltavin, occurs only in the Vltava Valley in the Czech Republic; approximately an area of 40 square miles. You may wonder how you can be sure where the stone comes from, as many fake stones are accompanied by a false certificate of authenticity. The online moldavite market is packed with replicas from Asia, but fake moldavite is also sold in Europe and many other countries. It is not uncommon for fake parts to be offered by private parties who have been deceived and attempt to compensate for their losses. If you investigate the dealer’s history and review the ratings of previous customers and customers, you will be rewarded with the most valuable reward: the truth. It should be noted that many traders have also been deceived into believing that their inventory of moldavite is real, as this stone is very rare and some replicas can be quite convincing. However, there are ways to distinguish the true Moldavian stone from the wrong one.

The true moldavite is known for its olive green color, which varies from pale and translucent to different shades of deep forest green with possible brown stripes. Gas bubbles were often included in the moldavite formation. These bubbles are a very good indication of real moldavite. The size of the piece should also be considered, as many fake moldavite pieces are impressively large and offer offer prices that are in fact too good to be true. Many fake moldavite pieces have a glossy surface similar to glass, which is appropriate since they are actually masterpieces of molten glass that have been carefully molded, and sometimes the seams of the shape are easy to see. Be careful with people who sell moldavite that is not from the Czech Republic or that is even green. Many sellers market Stones other than moldavite to benefit from their popularity. “White moldavite” is generally nothing else than calcite. The “African moldavite” has more in common with Sea Glass than a real tectita.

The surest way to identify genuine moldavite is to examine and hold a stone personally, as the energy emanating from the moldavite varies widely. Moldavite is classified as a rock climbing by metaphysics due to the particularly high energy frequency of this stone. Many people report a feeling of warmth, tingling and / or disorientation when they come into contact with the moldavite or even around the stone. The moldavite in our catalog is guaranteed to be authentic and we invite you to browse through our extensive collection. We’re waiting for you!

The Color Of Moldavite Stone

The Structure Of Moldavite Stone

We are talking about the physical composition of the stone. While many precious stones, such as quartz, have a crystalline structure, Moldavite does not. In fact, it is classified as having an “amorphous” structure, “amorphous” literally means “formless,” meaning that Moldavite can grow in various shapes or patterns.

Due to its amorphous composition, real Moldavite is difficult to process on a completely smooth, glassy surface. If the jewel in question is the right color, but it is as soft and thin as a piece of glass bottle, it can be a fake.

The Clarity Of The Moldavite Stone

Ask The Seller Where The Stone Is From

Moldavite, as stated in the introduction, is a tectite that is only found in the river of the Vltava Valley of Europe, located in what is now the Czech Republic. If the seller claims that the stone was extracted anywhere, except this region, it is almost definitely a fake.

See If The Moldavite Is Easily Scratched Or Dented

Moldavite is also considered to have healing and mystical powers, and has been used as a natural healing stone for several centuries. If you think you may be about to buy a fraudulent piece of moldavite, take it to a gemologist. Only this professional will be able to tell you with certainty if the stone is real or a fake.

Here are some of our real moldavites 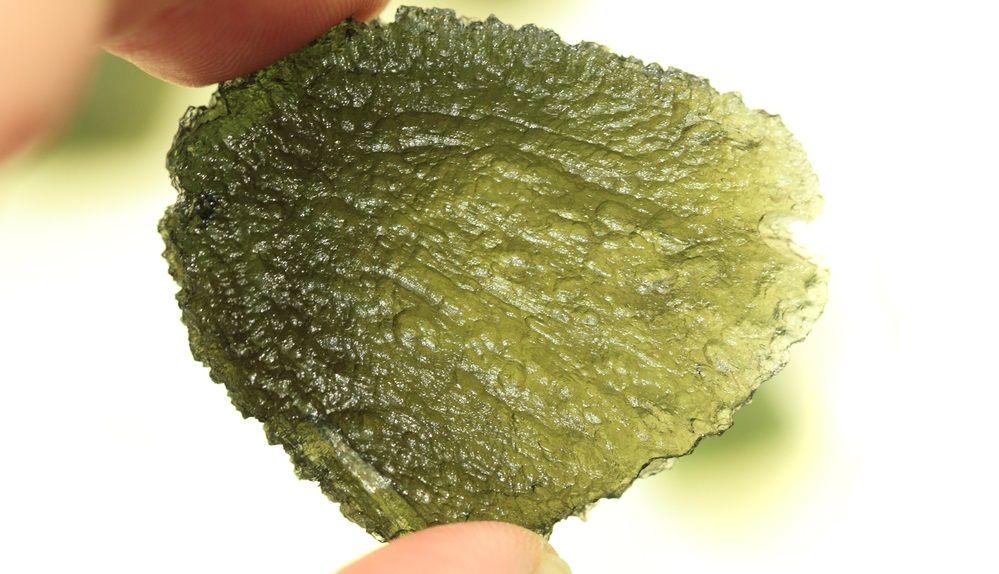 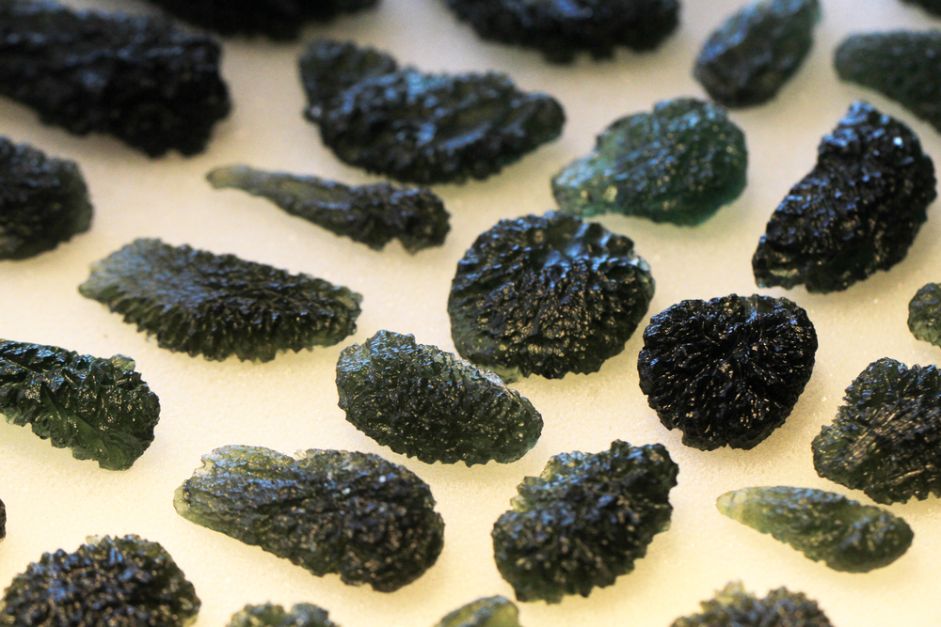 Moldavite is considered to be a very unique stone. According to legend, the stone is not originally from the earth. About 15 million years ago,…